Did you ever seen a PC not responding while opening a program? Okay, in this post we are going to discuss about PC stop immedialtely at the time we wanted to open a program.

A computer is a device that makes it easier for us to meet various needs, for example for activities related to work. The PC distinction is obviously very helpful in increasing productivity.

As a computer user, it is likely that you have been faced with the problem of slow loading and the description of the program not responding often appears. This is very likely to happen when the computer or laptop works beyond its capacity.

Let's say your laptop has a relatively small RAM memory capacity (less than 4 gb), then you often open heavy programs such as video editing software or similar programs, then your laptop will definitely hang in the middle of the road or not responding.

By already understanding the cause of the computer not responding often appears when it is opened, then of course the way to overcome a laptop not responding is technically very easy. The full description can be seen as described below.

Causes of PC Not Responding 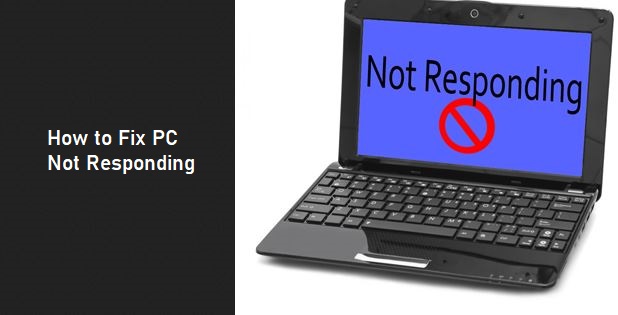 As explained above, the cause of the computer not responding when you use it is because the capacity aspect of the laptop is not in accordance with the weight of the load or program being run. However, this is a common cause, and does not rule out other problems.

So that you can easily solve the problem of a PC not responding, it's a good idea to first identify what causes the computer to crash and display the message not responding. Some of the causes, among others, are as mentioned below.

The most common factor why the computer suddenly stops and there is a message not responding when used is because your PC has a relatively low spec so it is difficult to run programs, especially programs that require large RAM.

The next cause of the notification not responding when the PC is opened is due to 100% or full disk usage . You need to provide sufficient space or disk space for the computer to operate normally. If not, then you will often encounter trouble in the form of not responding.

You can check if any of the software (especially newly installed ones) has crashed. This condition can also cause your computer to hang when in use.

It is commonly known that a virus infection or the presence of malware on a computer can take up large amounts of computer resources so that the computer becomes very slow until it is not responding.

What is CPU overheating? Every computer is equipped with a CPU where so that the PC can still operate normally, the CPU temperature should not overheat or overheat. If this happens, it is certain that your PC will not run normally.

At least those are some of the common causes of computers hanging or not responding when used to open a program. Now let's move on to how to deal with a laptop not responding that you may often experience.

How to Fix PC Not Responding

The solution for a computer not responding can be simple, but it can also cost money if you really want the problem to be completely resolved. Because in this case you need to add resources or resources on the computer.

Here are some easy ways to deal with a computer that can't run or freezes when used with the system notification display in the form of not responding.

The first thing you can do is to check the availability of resources on your PC. To do that, please open the Task Manager. Look at the information displayed, whether the remaining CPU usage, disk, and RAM. For example, in the CPU column the number is 100%, then you can be sure that your computer will crash.

To overcome this, you can reduce the CPU load so that then your PC will return to normal and can be used as usual.

Let's say your PC has a CPU clock speed of 1.1 Ghz, then RAM with a capacity of 2 GB, and on the other hand you use the PC for heavy gaming, then of course your PC will crash. You need to match the specs or capacity of your PC to the program or game you want to open.

You can't force the PC to open heavy programs if its capacity is low. This will only make your PC experience not responding quite often.

3. Turn off Active Programs in the Background

If your PC has relatively small RAM, I recommend you to upgrade the RAM. You can buy new RAM if there are still available slots for additional RAM. And if there is no empty RAM slot, you can upgrade.

RAM function is very important, when your PC runs out of RAM resources, you will be very disturbed because the PC will often hang.

Viruses can not only harm your data and computer, but will also interfere with your computer's performance in the future. When you log into Windows (for those of you who use Windows OS), the computer will run very slowly.

There are many free and paid antivirus programs that you can use to clean your computer of viruses and malware.

Various programs on your computer may need to be updated. If it is already available, to ensure there are no bugs that can interfere with the performance of your computer, please update it regularly.

In addition to ensuring that no programs crash on your PC, this is also to ensure that there are no problems with the programs installed on your PC because they never update.

Last word about PC not responding

PC not responding is not something that is foreign to some PC users, and maybe including you. Above have explained what the causes are and how to overcome the not responding computer. You can apply the steps described above, and hopefully in the future you will no longer be faced with PC trouble on this one.

And in closing, whether or not the performance of a computer is optimal is also largely determined by the user's usage patterns, so it's not only because of low specs. Therefore, use your computer following proper PC operating guidelines.